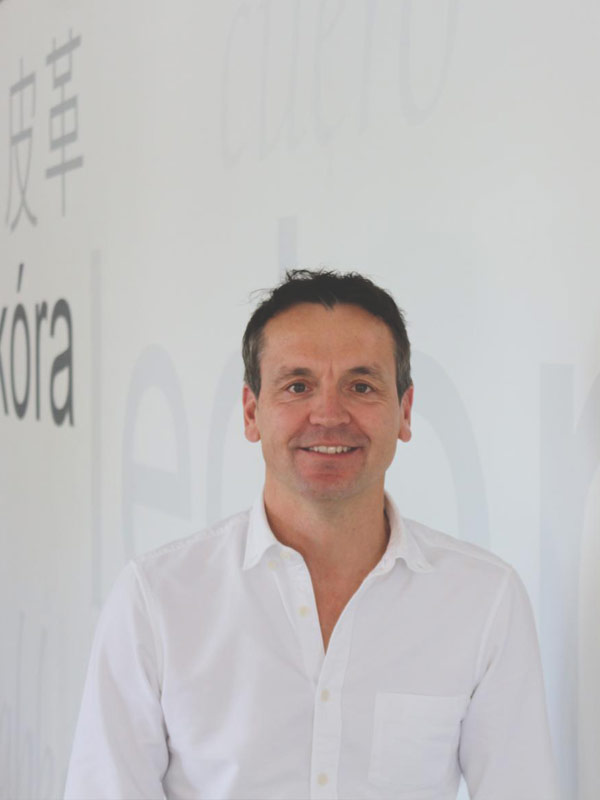 HOW IT ALL BEGAN:

Markus Cornelissen was born in 1969 and graduated with a degree in economics in 1995.

He spent time working in major business and trade hubs, including London, before following the call of home and taking on the role of CEO of Arnold-Klümpen-Leather GmbH. With it came responsibility for the global success of the company.

He set himself the task of guiding Arnold-Klümpen-Leather, a company steeped in tradition, into a new era.

But in a global market of natural products which have been traded across the borders of countries and continents for centuries, there seemed to be very little scope for innovation and transformation. The mechanisms of the global raw materials trade were almost impossible to predict.

Markus Cornelissen’s change of perspective in the early 2000s, with “Leather for Brands”, was a turning point for the company. Continuity, reliability, secure availability, sustainability and ethical environmental and humanitarian policies are key promises that brand-name manufacturers of leather goods make to their customers. So-called brand value, which is often achieved only through enormous effort and investment, is put at risk by any uncertainty or negligence in the raw materials trade. With this in mind, Markus Cornelissen, in close collaboration with the Leather Working Group, developed trading structures unlike any others of their kind in the world. These structures give business partners absolute security without having to pay a cent more for it.

“Our customers’ brand value is the driving force behind everything we do. Nobody has the right to endanger it.”

Since then, customers of Arnold-Klümpen-Leather have received their goods the day after placing their orders, always with quality guaranteed and at the current market price. In the rare event of a complaint, the goods are immediately replaced. Contrary to all the usual rules of business, Arnold-Klümpen-Leather holds large quantities of all the relevant leathers in stock in Kevelaer. This enables the company to guarantee the availability, homogeneity and price stability of its products.

Since Markus Cornelissen took over the leadership of the company, Arnold-Klümpen-Leather has invested more than any other leather industry trading company in worldwide sourcing, quality assurance and stockpiling.